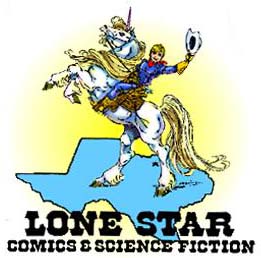 Lone Star Comics began as a tiny mail-order business operated by a junior high school student who had recently discovered the joys of comic book reading and collecting. That student, Buddy Saunders, began collecting comics in 1960, just a few months before Atlas comics became Marvel Comics and the old monster titles gave way to Spider-Man, the Fantastic Four, Thor, the new Captain America, and a whole slew of other exciting Marvel heroes. At the same time, DC Comics was reinventing itself with a revival of its Golden Age greats -- Flash, Green Lantern, Hawkman, the Atom, the Spectre, and others.

Not many of today's comic book retailers can say they once sold mint copies of Fantastic Four #1 for just 25c each, but that's just what Buddy did in the months following the release of that landmark issue. For seventeen years, Buddy sold comics, in the beginning to supplement his own growing comic collection, later as a means of financing his college education, and still later to supplement his income as a teacher. During that time, comic fans all over the country and even the world bought from Buddy's mail order service — later named Lone Star Comics. Then, in June of 1977, Lone Star Comics opened its first retail store in Arlington, Texas. We began selling on the internet in 1997 and the rest is history!